If you’re lucky, there’ll come a point when your business is involved in something that’s bigger than a blog post.

You might win a government contract that means bringing a much-needed service to a community. Or you might decide to create or sponsor a local charity event.

Of course, you’ll want to cover events like these through your own blog and your social media accounts.

But when it’s something that people in general might be interested in, there’s a huge opportunity to reach more people by getting your news out to the media.

And how do you do that?

By writing a captivating press release.

What is a press release?

In simple terms, a press release is the foundation of a finished news story.

It’s a convenient shortcut that gives editors, journalists, or bloggers everything they need to build a complete news article for their publication – ideally, without any investigative work on their part.

So when you send out a press release, what you’re really doing is pitching an idea to an editor.

You’re giving them the groundwork for a piece of news that might interest them, in the hope that they’ll make a few tweaks and run the story.

And if you get it right, it’s a win-win situation for both the editor and your business.

They get an interesting story for their publication with almost no effort.

And your business gets its name, product, event, or achievement out in the world and seen by as many people as possible.

But don’t make the mistake of thinking it’s just a quick and easy bit of publicity. A good press release is definitely NOT (or it should never look like):

So with that out of the way, we’re ready to start crafting the perfect press release – something that appeals to news editors and their readers (and also gets you a sneaky bit of publicity along the way).

Here are 5 steps to help you write an effective press release:

Before you start to write a single word, you need to answer this crucial question:

Why should anyone care?

A good press release isn’t about your company, its products, or its achievements: it’s about a good news story.

And if there isn’t a good news story, you shouldn’t be writing a press release.

So just like any good journalist, you’ve got to find a way to spin a set of dry facts and events into a narrative that can grab the interest of a particular community of readers.

In most cases, that means you need something with a human-interest angle.

Here’s a good example from a recent press release issued by the government: 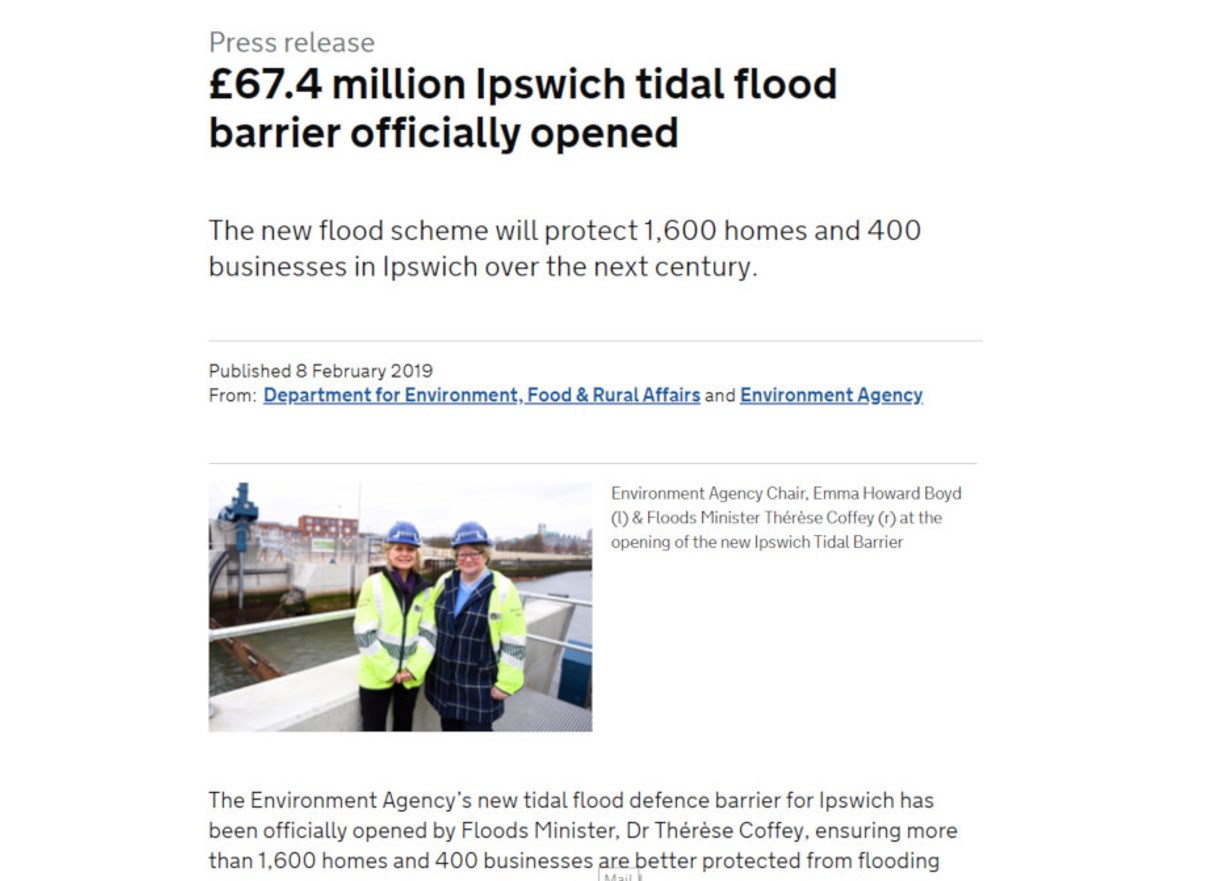 If you take the headline on its own, it looks like this press release is another self-congratulatory promotional boast.

And if your business had just successfully finished a massive job with a huge budget, you’d probably want to boast about it, too.

But a business hitting its deadlines and raking in a profit isn’t a news story – and nor is the fact that the government has completed a multi-million-pound project.

The newsworthy angle here (and it’s one this press release focuses on well) is how this new construction will protect thousands of homes and businesses in the local area.

That’s a real change in circumstances for the people who live nearby. It’s a piece of news that affects their wellbeing – and that means it’s a genuinely interesting spin when compared to a simple announcement about a completed project.

So if you want to give your press release the best chance of getting picked up by a news outlet, you need to shift the focus away from your company, towards something that readers might actually care about.

2. Write for the editor (not just the readers)

For the most part, you’ll want your press release to look as close to a finished news article as possible.

Editors and reporters are busy people who get a flood of press releases each week – so you need to give them something that’s just about ready to publish.

But that doesn’t mean you should be adding your own journalistic flair.

So stick to the facts, and present only the information that the editor will need to understand and publish the story.

Remember: you’re just giving them the ingredients for a good story – you’re not trying to commandeer their publication.

Here’s an example from the charity Age UK: 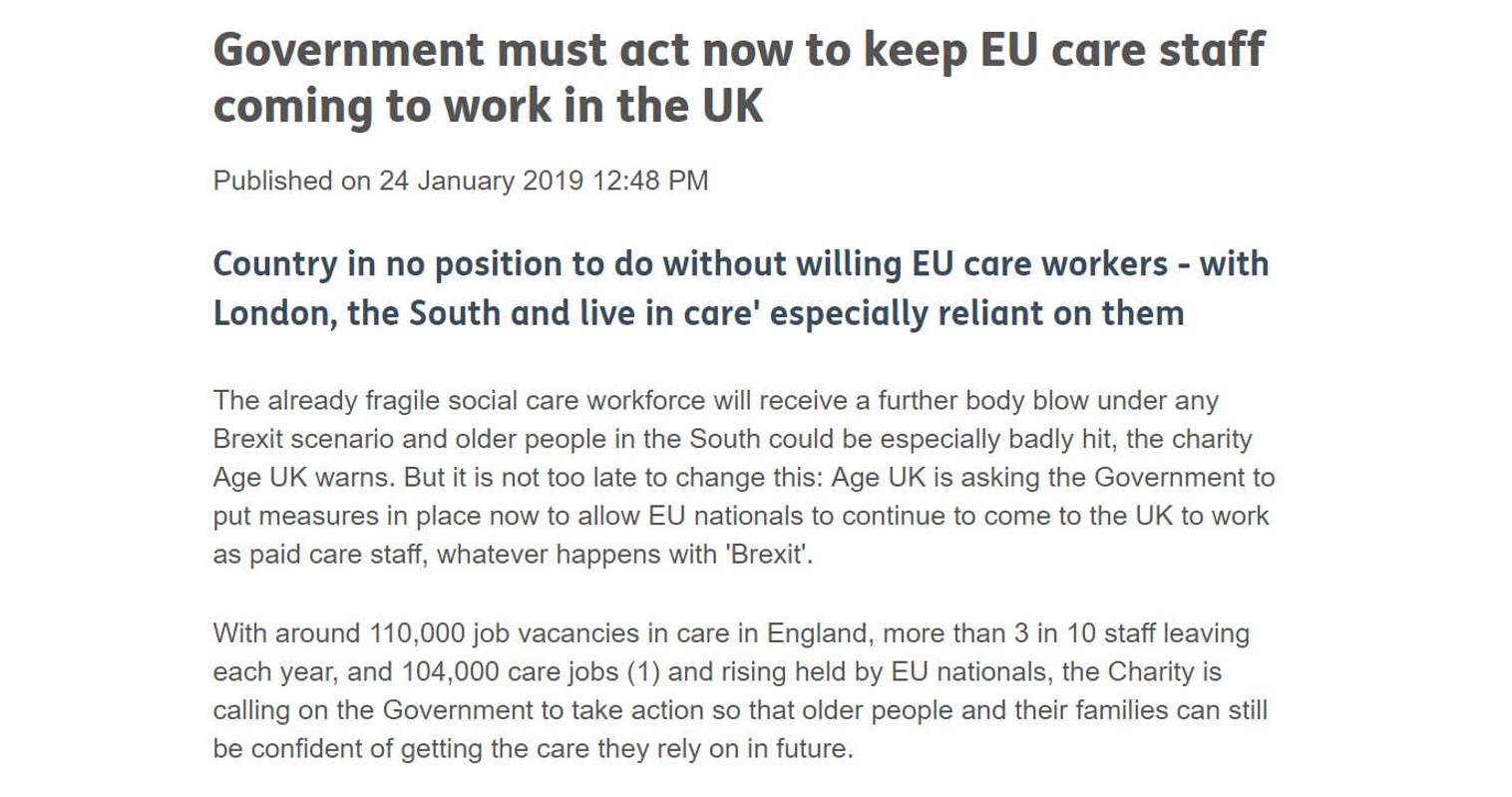 As a finished article you might see in a newspaper, it’s a good story.

There’s a captivating headline, and the narrative paints a bold picture of a concerning situation.

But if this arrived in a news editor’s inbox as a press release, they might be put off.

Phrases like ‘must act now’ and ‘in no position’ seem like they’re assuming too much on behalf of the publisher. If the news team doesn’t agree with these views, they’ll have more work to do to untangle and re-write the story to fit their own tone of voice.

So instead of the dramatic headline they’ve used, Age UK could have gone with something more neutral and informative, such as:

It’s not a juicy headline to attract readers like the original.

But it gives the editor an immediate understanding of the story at first glance – and it leaves room for the professionals to add their own dramatic spin if they want to.

3. Stick to the expected structure

There’s a particular way of writing a press release – and there’s a reason why everyone follows it.

Editors get dozens of press releases from businesses every week. And if you want your story to look like a genuine press release, you need to follow a few basic rules.

In particular, you need to:

But beyond these basic tips, there are two important journalistic techniques you need to be aware of – and they both concern the structure of the press release.

The opening paragraph of any news story is the most important part.

It needs to summarise the entire story so well that anyone reading could get the gist of the whole article without reading any further.

And one of the easiest ways to make sure you’re giving a complete picture is to follow the five Ws (who, what, where, why, and when).

Here’s a perfect example from UNICEF: 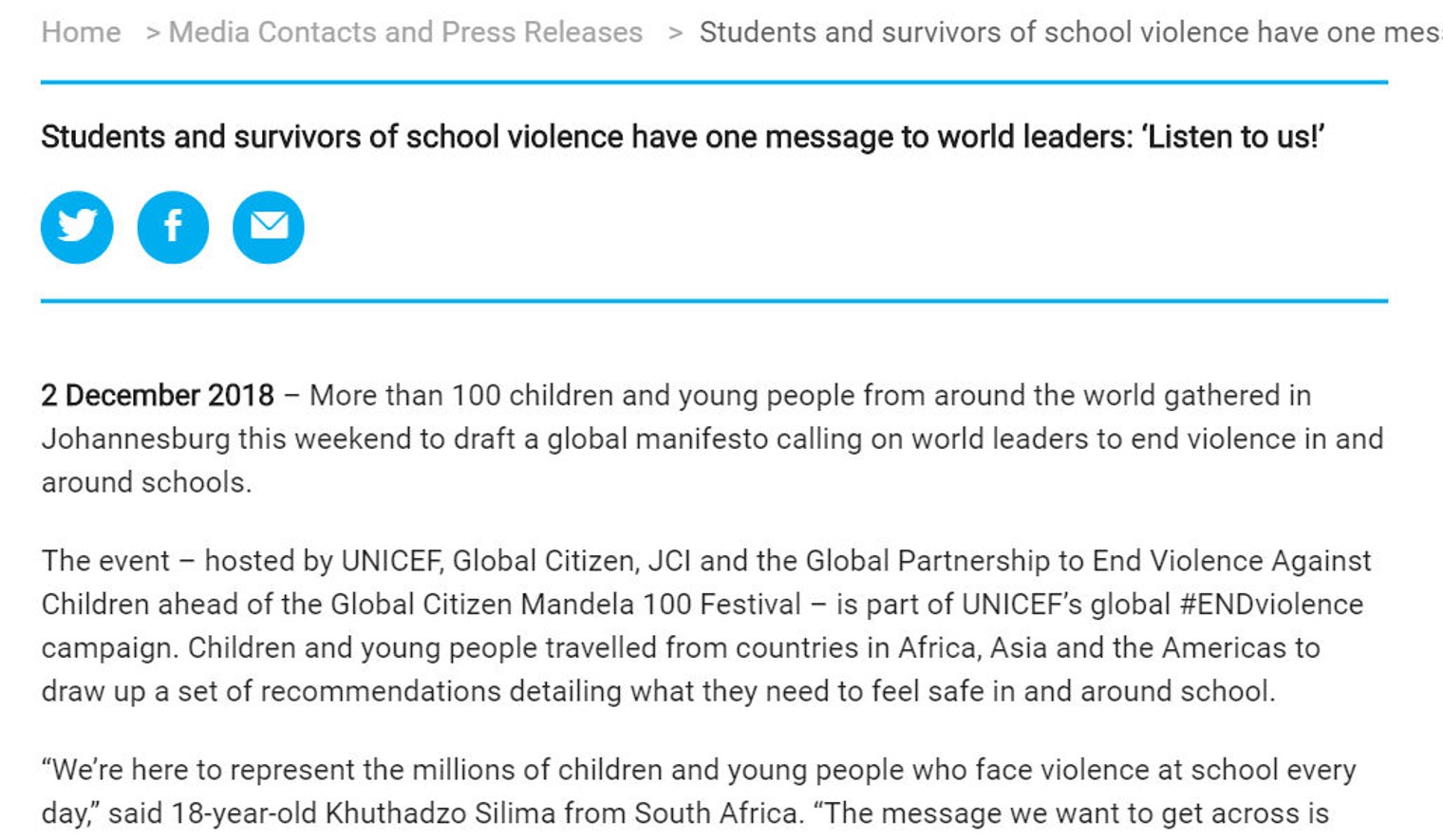 When we break this first paragraph down, we can see exactly how well they’ve covered the five Ws in such a short space:

In just 32 words, UNICEF has painted a complete picture of the entire story.

They’ve given their readers everything they need to know – and if they stop reading after 32 words, they can still go away feeling generally up to date with the news.

The second technique follows on directly from the five Ws – and it’s a format that’s important to both editors and the final readers.

The opening paragraph summarises the entire story. And as you move further down the press release, the story gradually opens up with more details, and less crucial aspects of the narrative.

That’s why it’s called ‘The Inverted Pyramid’. The biggest, broadest, and most important information is at the top – and the smaller, specific, and less important details are left to the bottom.

In any good press release, you’ll always find the key details towards the start of the article, with any surrounding context, explanations, or quotations further down.

That’s great for readers who don’t want to read the whole story.

But it’s also important for editors:

If they like the story in your press release, but they don’t have space for the whole thing, they can start cutting from the bottom and work their way up.

And ideally (if you’ve built your press release as an inverted pyramid), it doesn’t matter where they cut it.

If they remove everything but the first paragraph, they’ll still have a complete mini-summary as a story.

And if they remove the last few paragraphs (which were full of quotations and fine details), they’ll still get a summary that’s followed by some surrounding context and fleshed-out details.

You’ve made the editor’s job easier, and you’ve shown that you understand how a news story works – and that means you’ve massively improved your chances of getting your press release picked up.

Let’s use the same example from UNICEF to see exactly how they’ve done it: 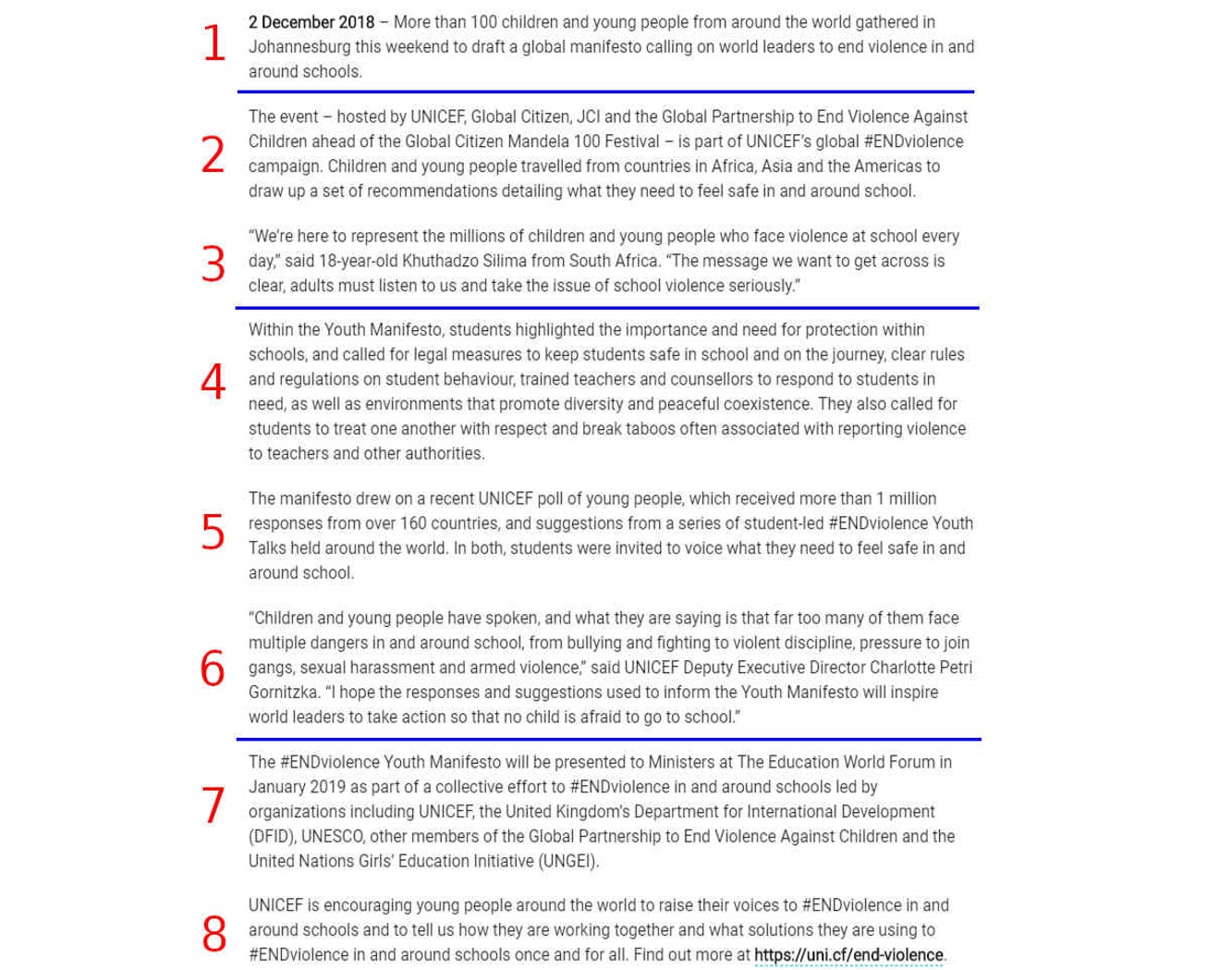 Paragraph 1 is the self-contained summary that covers the five Ws. The blue line underneath shows a convenient place where an editor might choose to end the story if space is severely limited.

Paragraph 2 expands on the ‘Who’ with some details about the event: the companies hosting it, and the continents the children have come from.

Paragraph 3 includes a quotation to add flavour and emotion to the story, as well as bolstering the ‘Why’ (to get adults to take action). Since it looks like the more concise and powerful of the two quotations used, it’s kept higher up in the pyramid. And again, the blue line shows a place where the story could end in a satisfying way within a small space.

Paragraph 4 goes deeper into the ‘What’ (the specific details contained in the manifesto) – and paragraph 5 offers some background and context to explain how this all came about (‘Why’).

Paragraph 6 contains an alternative quotation (and since it’s the longer and less powerful one, it’s pushed further down the pyramid). It’s also a convenient place to cut down the story to fit a medium-sized story, marked by the final blue line.

Paragraph 7 is full of information that’s mostly unimportant to the average reader (the ‘When’ of the presentation, and a long list of secondary ‘Who’s). At this lower end of the pyramid, there’s nothing particularly essential to the story – it’s just tying up a few details in case anyone wants to know.

And finally, paragraph 8 is a call to action. If anyone has read this far, they might like to read more – so there’s a useful link to direct them to more information.

Any editor looking to cut down this press release to fit their publication is going to have an easy time starting from the bottom and working their way up:

Ready to get published?

I’ve covered a lot here in this guide – and it might feel overwhelming when you actually sit down and try to write.

But with a little practice (and with these examples and breakdowns as a handy reminder) you’ll soon start to get the feel of it as you write more press releases in the future.

So before you write anything, make sure you’re:

And if you’re looking for more guides to help you write for your business and better communicate with an audience, you can have a look through some of the detailed tips in Content and Blogging.

Ed Palmer is a freelance copywriter at Keep This Copy. He's spent more than five years helping businesses look good and sell more stuff – writing for and about almost every business and industry there is.