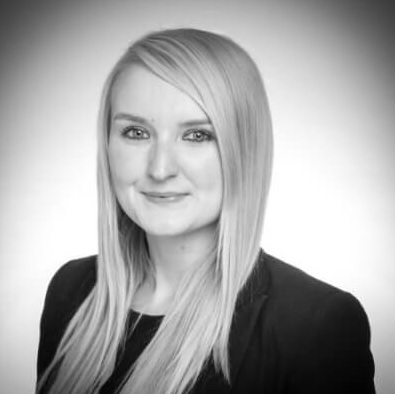 At The UK Domain, we analysed the latest available data from the Office for National Statistics (ONS), which shows the number of micro, small and medium-sized businesses to be established between 2007 and 2017. We did this with a view to better understanding which SME sectors are the most and least successful.

Using this data, we were able to ascertain which sectors are the best to venture into if you are thinking of planning, building and starting your own business and those that appear to struggle and should therefore be avoided.

First, we looked at statistics across more than 2.6m micro, small and medium-sized businesses which exist within 18 core industries.

Then, we examined how likely these businesses were to thrive over certain periods of time, up to 10 years and over.

So, let’s take a look at the results.

Here is a summary of our key findings:

Micro businesses (one to nine employees)

The industry with the highest number of micro businesses is within the professional, scientific and technical sphere with a total of 451,740 having started up in the past decade.

Of those businesses, 117,110 have stood the test of time and survived for 10 years or more. Only the agriculture, forestry and fishing sector has enjoyed increased longevity with a total of 118,450 related business lasting for 10 years and upwards. 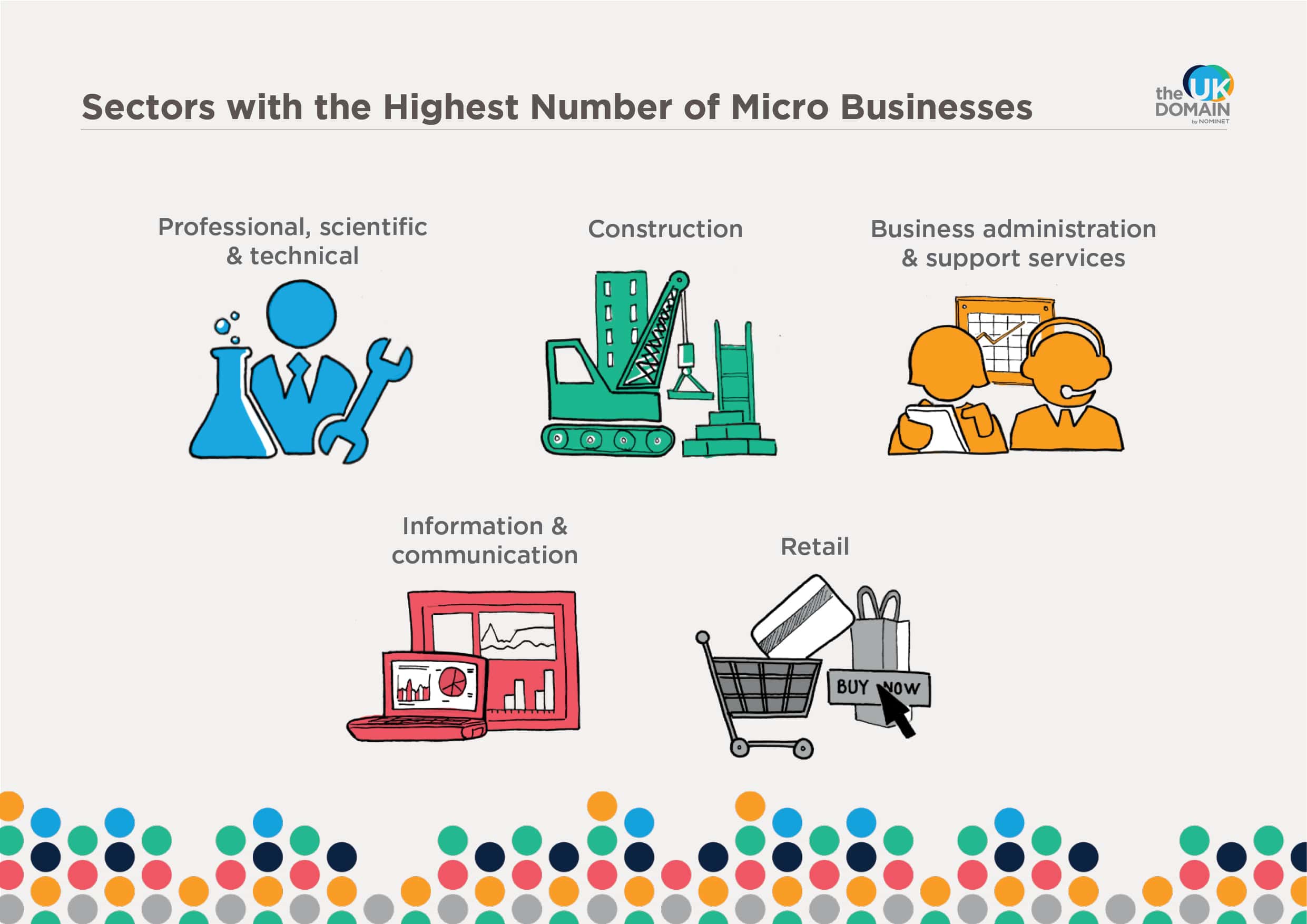 The figures surrounding the professional, scientific and technical sector are substantiated by an EDF Energy study, called Jobs of the Future. This aims to encourage more people into science, technology, engineering and maths (STEM) careers.

According to the report, science, research, engineering and technology jobs are expected to grow at double the rate of other occupations, creating 142,000 jobs between now and 2023.

The report used new analysis of Government data and examined trends in the growth of science, research, engineering and technology jobs.

The research predicts that computing skills will be the most in demand with the highest number of new jobs (25 per cent).

This reinforces the theory that professional, scientific and technical businesses will boom moving forward and require the extra support that newly skilled candidates will bring to the table.

The next highest total in the micro category was construction with a total of 301,065 existing businesses, 113,500 of which are 10 years or older.

In fact, according to a Working Futures 2014 – 2024 report by the UK Commission for Employment and Skills (UKCES), the construction sector is expected to witness the fastest rate of growth in both output and employment terms, resulting from an increase in public and private investment.

Business administration and support services saw a total of 206,450 businesses and information and communication came in with 205,580.

In fact, as reported by the FSB, the proportion of small businesses that innovated in the past three years was highest in the information and communication and manufacturing sectors (both 84 per cent).

According to Export.gov, the information and communication sector is vital to the UK jobs market because of the work it does to combat cyber security threats.

The UK ICT sector contributed £124 billion to the economy in 2016, increasing by more than 20 per cent from 2011. The sector also accounts for five per cent of all UK jobs, which will increase alongside cyber breaches and the manpower required to tackle them.

Retail has modest success roughly in the middle of the table with 177,075 businesses, 71,490 which are 10 years or older. Not far behind was arts, entertainment, recreation and other services (151,085).

So how do the most popular industries do during their first 10 years?

At the bottom of the table, with a total of 6,285, was public administration and defence. A mere 255 of these businesses are less than two-years-old and 390 are aged two to three, compared to 2,350 having lasted 10 years or longer.

In fact, public and administration and defence also took bottom position of all industries across small businesses, with a total of 330, and within the medium-sized category holding on to a mere 165 total.

The UKCES report emphasises that current Government commitments to reducing the budget deficit will constrain the public admin, health and education sectors in the medium-term.

However, as concerns for budgetary balance decrease, increasing demand is expected to accelerate growth throughout the sector in the long-term.

Topping the table for small businesses is accommodation and food services with a 32,670 total. Just under half of those (14,880) have lasted for 10 years or more.

The services sector makes up approximately 80 per cent of UK gross domestic product (GDP) and has recovered strongly from the 2008 recession.

The average year-on-year growth rate from financial year ending (FYE) 2008 to FYE 2018 was 1.6 per cent, making it the best-performing sector of the UK economy over that period.

In second position was health with a total of 27,125 businesses. In the micro category health came 12th down the list, meaning that larger businesses of this kind appear to enjoy an improved success rate.

The UK’s Department for International Trade (DIT) aim is to enable the UK to trade its way to prosperity, stability and security by helping businesses export, driving investment, opening up markets and championing free trade.

Supporting firms in the healthcare sector, a sector with enormous potential for future international growth, is integral to the DIT mission, meaning there is plenty of scope for investment in this industry moving forward.

Production (manufacturing) totals 24,005 businesses and professional, scientific and technical has 22,785, so while it does not top the list in the same way as it does micro businesses, it still holds on to a respectable fourth place.

Although manufacturing appears to be doing well in its current state of play, the UKCES report predicts that this sector will grow at a slower rate than the wider economy over the next decade in the face of intense competition from overseas.

Productivity growth is expected to lead to a continued decline in employment, with traditional roles being affected in particular.

Ahead of the lagging public administration and defence is agriculture, forestry and fishing (4,000), finance and insurance (3,405) and property (5,345).

Combined with recent regulatory and financial reporting developments, these changes are putting severe strain on the more traditional business models.

As a result, many insurers are responding by reimagining their internal operations and business strategies, but the pace of change outside the industry has been relentless and even proactive companies are struggling to remain on the cutting edge.

Production tops the list when it comes to accounting for medium-sized businesses with a total of 6,395.

This makes sense as production can be carried out more effectively and results in a bigger yield when the workforce in question is larger. In fact, the vast majority of production firms (5,890) are 10-years-old or more.

Businesses which were few and far between, other than public administration and defence, include agriculture, forestry and fishing (410), property (585) and motor trades (765).

Watchdog Which attributes a dip in the property market to the economic uncertainty surrounding Brexit, with house price growth slowing year-on-year and the number of sales dropping since the 2016 referendum.

According to Deloitte, retail is an industry in transformation, with new channels driving growth as the old channels decline and retail is re-invented.

This year may have seen store closures, business failures and job losses but online and eCommerce platforms have continued to drive growth and competition in the sector, making this the surefire way to proceed with a start-up.

The technology behind this could even have a trickle down effect, in turn helping to bolster the ICT and professional, scientific and technical sectors.

Most Popular Sectors for New Companies 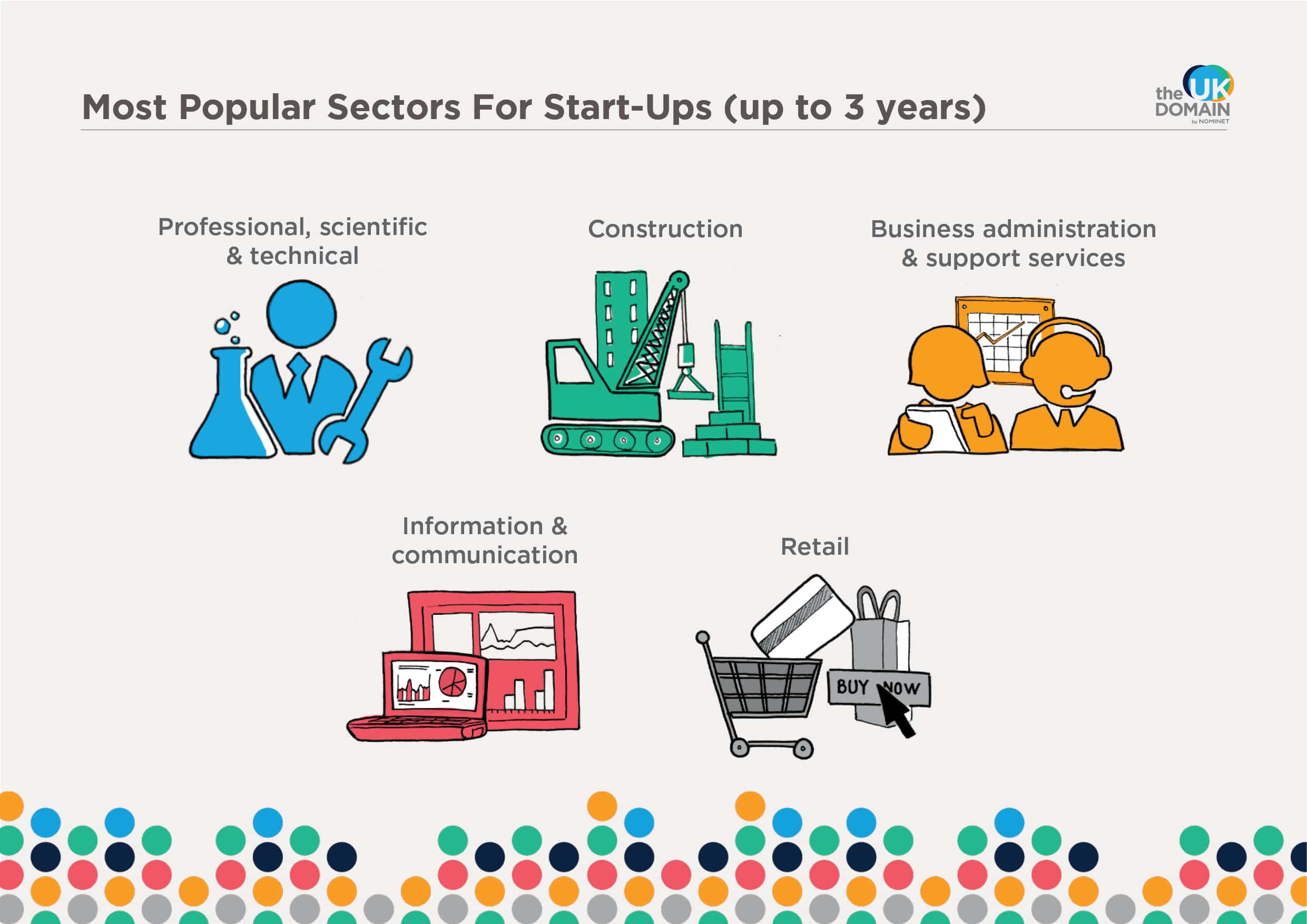 And those that are the least popular

Across all micro, small and medium-sized businesses, the industry which has the highest total of enterprises (147,730) is the professional, scientific and technical sector. In fact, in 2017, this sector accounted for the largest number of companies, with 17.9 per cent of all registered businesses in the UK.

The professional, scientific and technical sector also had the largest growth in numbers between 2016 and 2017, an increase of 20,000 businesses.

In short, it seems that the professional, scientific and technical domain holds a great deal of promise for start-ups, with plenty of potential for a host of new STEM roles to emerge if the latest reports are anything to go by.

Coming in second was construction (319,555), third was business administration and support services (227,120) and fourth was information and communication (216,640).

That said, if your plan is to kickstart a micro business, then the above three sectors appear to be gleaming prospects.

In the small business arena, the accommodation and food services, health and professional, scientific and technical industries all provide a good place with which to start.

If you are hoping to cultivate a thriving medium-sized business, consider the production, education, health, business administration and support services and professional, scientific and technical sectors, but be aware of the forecasts around the future of manufacturing.

We have analysed Office for National Statistics which shows the account of VAT/or PAYEE based enterprises in the UK, by employment size band, age of business and UL SIC 2007 broad industry group. This is the latest available data from March 2017.